The rare Lumholtz's Tree-kangaroo is restricted to the uplands of Australia's wet tropics. It is the smallest of the tree-kangaroos.

Long powerful forearms and short broad feet allow this kangaroo to live in the rainforest canopy. Males can grow to 10 kilograms, with a 70 centimetre tail that is used for balance. Tree-kangaroos can move their feet independently.

This walking tour is conducted along the edge of 5b rainforest which is the preferred habitat of Lumholtz's Tree-kangaroo.

Most of this type of rainforest has been cleared for agriculture as it grows on deep, rich volcanic soils and is characterized by a large number of semi-deciduous trees such as the sought after Red Cedar. More tree-kangaroo info 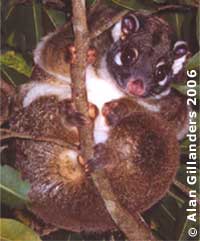 The Wet Tropic area of Australia is home to fourteen species of possum, some of which are found nowhere else.

On a regular nocturnal tour you are likely to see about eight Coppery Brushtail Possums and three Green Ringtail Possums.

The Greens are endemic to the highlands behind Cairns while the Copperies are found throughout Queensland's Wet Tropics. Green Ringtails have small ears, white bellies and five stripes on their backs. Coppery Brushtails have large pointed ears and are often a rich red colour.

Occasionally Striped Possums are seen. These little carnivores are highly active unlike the slothful Greens.

Tours to view the high altitude species and gliders can be arranged. 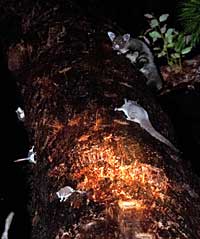 A longer tour to see more species including the high altitude rainforest endemics of Herbert River Ringtail and Lemuroid Ringtail Possums. In the tall eucalypt forest we track down gliders. Of the five possible gliders species we often see two and occasionally four. We often find two out of the three ringtails. “It is possible (in theory!) to see 13 species of possums and gliders within an area of a few kilometres.” Tropical Topics Vol 1 No. 7 November 1992

Usually only offered between May and November but check with Alan regarding glider activity. In winter we can see up to eight species of arboreal mammals in an evening but four is normal for summer.